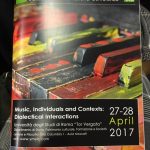 The breadth of the remit made for a rich multilingual survey of current research by young researchers from as near as Nottingham and as far as Hong Kong, Portugal, Turkey, and South Korea – and featured three papers by PhD researchers from the York Music Department. Among presentations on Chinese opera, the Javanese wayang kulit, controversies in the music press in Enlightenment Berlin, Amazonian heroines in early opera, charismatic worship, music and the Carnation Revolution in 1970s Portugal, transtextuality in contemporary Lithuanian art music, Georgian traditional music revival, reflections of Lutheran moral attitudes to wealth in Bach’s cantatas, Elliott Carter’s fourth String Quartet as ‘postmodern hyperspace’, and Mahler’s relationship to Wagner’s anti-Semitic ideology, a strong sociological bent unified seemingly disparate interests.

Liam Maloney’s paper ‘“That’s Our Gospel!” – Contextualising Christian rhetoric from disco to house music (1971-1999)’ was the product of a recent research project supported by the Finzi Trust and explored the appropriation of religious language and imagery as a form of secular meaning-making at the intersections of marginality in disco and house. You can read more about Liam’s work on house music here. 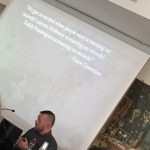 Charlotte Armstrong presented on nineteenth-century social critic Max Nordau’s diagnosis of ‘musical degeneracy’, focusing on particular critiques of Wagner’s unending melody and of the ‘post-Wagnerian’ Franz Schreker (a composer of whom it was said, ‘Schreker has set to sick music every sexual or pathological perversion’). The paper emphasised that the rhetoric and narratives of ‘degeneracy’ were part of the fabric of contemporary cultural discourse prior to the rise of the Nazis.

Claire McGinn talked about the potential for multiple differently politically inflected interpretations of some ‘bland’ Soviet-era Estonian art music by Veljo Tormis, suggesting that plurality as a creative/interpretive condition could be a by-product of a restrictive climate that was both dogmatic and uncertain (as well as a general symptom of postmodernity).

The full programme can be viewed here.

This was an exciting first event that we very much hope will be repeated, and we encourage any researchers in musicology/ethnomusicology to submit proposals in the future.

Claire completed an MA by Research at York in 2015, supervised by Dr. Tim Howell and funded by the York Masters Opportunity Scholarship. Her PhD focuses on Baltic art musics from the mid-twentieth century to the present, dealing with questions such as whether or not ‘the post in post-Soviet’ is ‘the post in postcolonial’, as…